Dutch Agri Natural capital accounting: get a shared vision and get going!

They have to see nature as an asset and a potential asset. Not only based on money, but on value

The Drones and the Bees
Biesmeijer, who works with pollinators, gives an example of how big companies who want to be ‘green’ can do this through natural capital accounting and also maximise profit. He explains that the example of pollinators is one of the best ways to see the direct benefits of natural value translated into money. The visit and pollination of a single bee to apple crop can produce a product, thus translating directly into value for the farmer, and then entering into the consumer’s economy. In this way, the estimated monetary value that natural pollinators add to the system is between €250 to 500 billion every year!

According to Biesmeijer, this is why bees are a great way to illustrate the direct monetary value that nature can have. Once crop growers understand and see the benefit of natural systems, they will see it is in their best interest (as well as the planets) for them to take care of the environment that pollinators need to thrive. Of course, not all added value is this direct and easy to see. For example, it can be harder to assign monetary value to natural insect predators that kill pests which eat crops. However, on this front, Biesmeijer points out that the natural way will always be cheaper than technical solutions that we invent to solve these problems, such as high tech pesticide or pollinator drones.

If you go for short term solutions, it’s harder to make the case for nature

Why then are we still developing new technologies to do nature’s job in a more expensive way? Biesmeijer explains it simply: it’s not always easy to express the value of nature in financial terms. Even if there is inherent value, it may not be seen as equally important if it’s not monetary value. Thus, it is important for value to be seen as a whole that is built by elements over the entire span of a system. Parties (governments, farmers, consumers, researchers, etc.) who want to implement natural capital accounting cannot avoid working together synergistically, because they are the system. Furthermore, they must think together in the long-term. Investing in pollinators may take a few years before reaching the tipping point, but after that, the yield will be greater than with technology.

What about palm oil?
Veerman also brings up the topic of palm oil. Using palm trees, which are responsible for the production of palm oil, appears to be more efficient than using soybeans or rapeseed. However, palm oil is infamous for its role in environmental issues such as deforestation, the loss of biodiversity, and damage to the habitat of orangutans. When asked about natural capital in this context, Dr. Peter van Bodegom points out that palm oil only appears to be cheap and more efficient because there isn’t value being assigned to these losses. “It’s cheaper to produce because they don’t take the cost into account. The environmental cost, the carbon losses, the biodiversity losses.” So, for palm oil production to continue with less environmental impact, it would have to take on a totally different business model that accounts for natural capital as well. This could entail, for example, things such as more frequent crop rotation.

Furthermore, sustainability certifications need to be altered as well so that they take into account the various natural capitals that are involved in production. This is currently not the case, so this shift in sustainability standards to a natural capital accounting system is critical. Dr. Biesmeijer then points out that this would bring consumers in the new valuation process as well. They need to set the standard for biodiversity monitoring in production. “It’s not just about money in the business, but how the value chain is linked to societal challenges.” Thus, the shift to natural capital accounting needs to be societal and include consumer involvement in setting standards.

Natural capital and the European Green Deal
The three also discuss a possible natural capital approach to the EU’s new Green Deal. In this case, there would be distinct roles of companies, governments, and consumers. Consumers must change their consumption patterns, companies must change the way they do things, and governments must make new rules for the new all inclusive natural value game. Each of the three have unifying goals and ambitions, but they lack agreements on how all three will work together to get there, and to get there fast. Biesmeijer and Van Bodegom think that key lies in sharing uncertainty about how to navigate this. The three parties need to create the open space where they can cope up with non-traditional, collaborative solutions. Governments tend to lag behind companies, who have technology and creativity, but they can produce the framework and leave room for society to innovate and develop.

Get a shared vision, and get going

So, would this then be a top-down approach? Or a bottom-up one? Well, it’s neither, says Biesmeijer. “I think the vision is from the EU, so you have a very strong vision or goal. But underneath that government will have to allow this new partnership to develop and innovate itself. And that’s very difficult for governments. It means completely leaving it open and trusting that once you have set the ambition, the direction of innovations will go in the right direction.” This is something that mirrors the realities of a natural value chain - interconnectivity and communication from all levels that inherently depend on each other. Unless natural capital accounting is implemented and carried out as an integrated but freely developing system, we're not going to get here. As Biesmeijer puts it, “acknowledge that we need each other in order to come up with and develop solutions."

The comparison of a natural capital accounting system to an ecosystem is used quite frequently in the conversation. However, Biesmeijer thinks that a honeybee colony may be a more appropriate comparison. In an ecosystem, each member has their own goal; “members meet each other and kill each other.” With natural capital in the green deal, it’s all about collaboration to fulfil a common goal, just like bees in a hive following their queen (who, in this case, would apparently and humouristically be the first female president of the European Committee who has fully committed herself to the Green Deal).

Working together to build the system
Veerman concludes the interview by asking his interviewees if humans really are capable of turning the system on its head and making this fundamental change, since it took over 10,000 years of collaboration and evolution to get to where farming is today. Van Bodegom and Biesmeijer argue that now is our best shot to do so through conscious applications and monitoring of technology and increased cross-disciplinary collaboration. We need to understand the natural world, apply tools that work with the system, and look at many types of value from all parts of the system. Combining precise ecological knowledge, economic systems, and social information is key.

As Biesmeijer puts it, “I think this is the first time in our history that we can do it. Because finally we can really see the system. Based on all the data science and all the technology we have, we have a much better approach to understanding the system. We are closer to understanding the whole system. We can even monitor in detail to see whether things go wrong: biodiversity, income, happiness, whatever. 10,000 years ago, we made our choices based on trial and error, but now we have technology.”

What do you think about the concepts discussed in the video? Should sustainability certification standards indeed be altered? Could the natural capital approach be solidified and implemented with the EC's Green Deal?


Dr. Koos Biesmeijer is the head of the Pollinator Ecology research group at Naturalis, Leiden. He is also a professor of Natural Capital at Leiden University. His work focuses on improving biodiversity in general, as well as specifically on making sure that the Dutch landscape is suitable for pollinators. He is also an advisor on biodiversity to the province of South Hollands, as well as the vice chair of the Natuurmonumenten, a nature conservation organisation.

Dr. Peter van Bodegom is a professor and head of the department of Environmental Biology within the Institute of Environmental Sciences at Leiden University. His work focuses on understanding mutual dependencies between nature and society. He utilises tools such as molecular monitoring tools, remote sensing, and data science to understand the impact of human influences on nature and biodiversity. Dr. van Bodegom has published over 200 peer-reviewed articles related to these topics.

Join the Conversation in our Digital Food series: 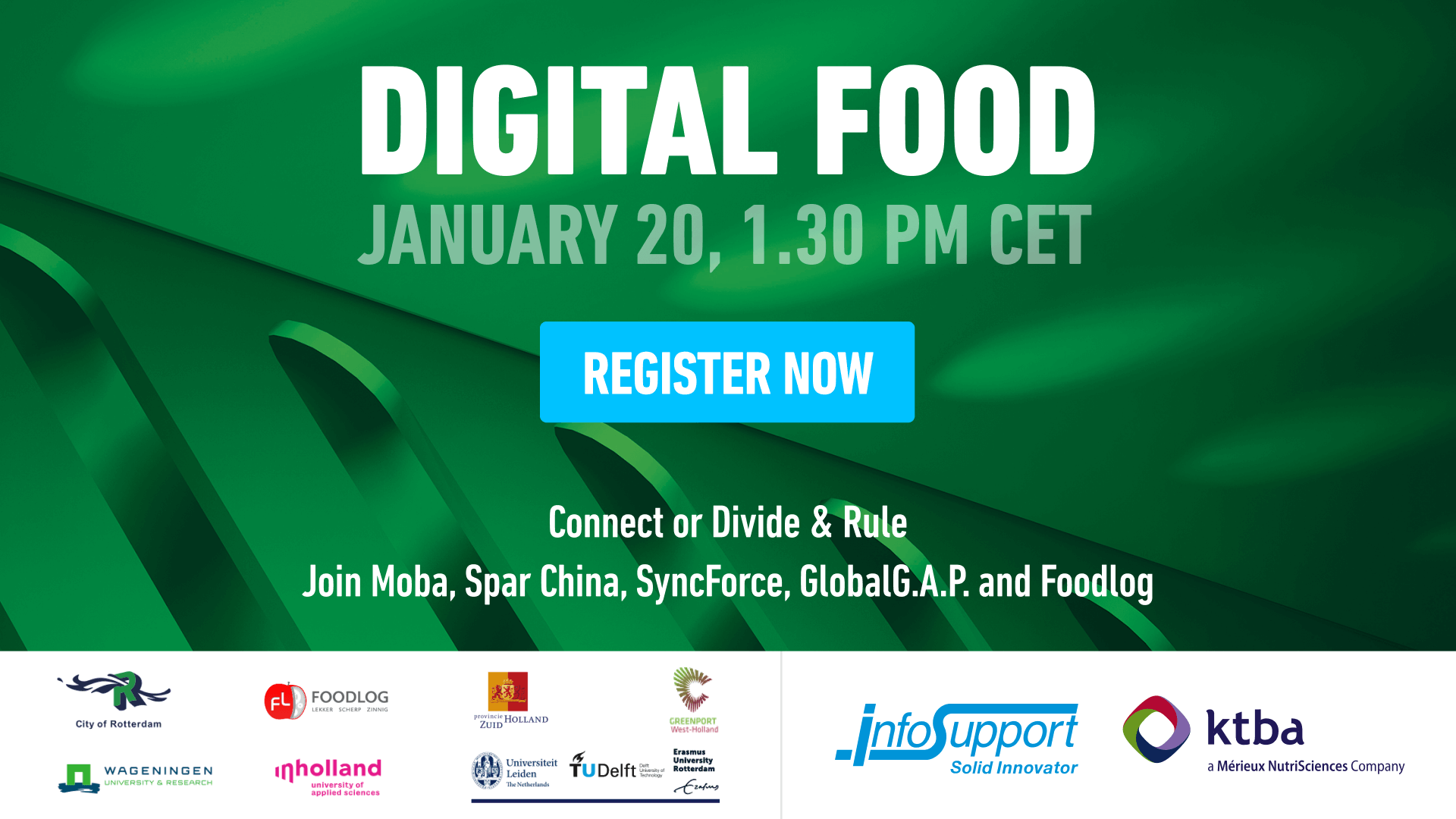 Jaap, I guess the particularity of this vision is that it defines money and value creation as the direct mirror of real reality (= not psychological reality as in ordinary markets). In a way, nature is so deeply engrained that the hearts and minds you are referring to are either fully served or just a crooked distraction leading man's choices astray.

Don't forget the heart and mind, they may have more impact on how much value we attribute to biodiversity than ecosystem services. In other words: the more we let people 'experience' nature, teach them about it, the more they are going to appreciate it. "In the end, we will protect only what we love. We will love only what we understand. We will understand only what we are taught.” (Baba Dioum)

Interesting Article !
An other way to include the effects of our activities on nature and available resources is described in the book "People v. Resources" ( Gebroken Kringlopen) van Ronald Rovers. Instead of given nature or a resource a value in money, he mentions a parallel system. For example with respect to climate change, every one get a certain amount of CO2 he/ she may use per year, ....the same of course for companies: CO2 accounting. The same can be done with other critical resources.

But Belinda, although Koos says natural capital shouldn't be new, it actually is for our times. Natural capital accounting fully integrates what harms and heals nature. No one did that in the past 5 decades.

From my perspective the question is rather: will companies and citizens be prepared to turn capital into being the mirror of nature and its creation by their hands and minds.

I really hope they can all work together. But they've done so for at least the last 50 years and see what's become of that... Frases like "We are closer to understanding the whole system" and "monitor in detail to see whether things go wrong" don't give me hope. Otherwise we wouldn't have a climate crisis or at least take bigger steps doing something about it. That's a greater threat to us than all things combined. Technology can't fix these problems fast enough and above all: if we try to fix all problems with the same way of thinking which created them, we are on a mission impossible.