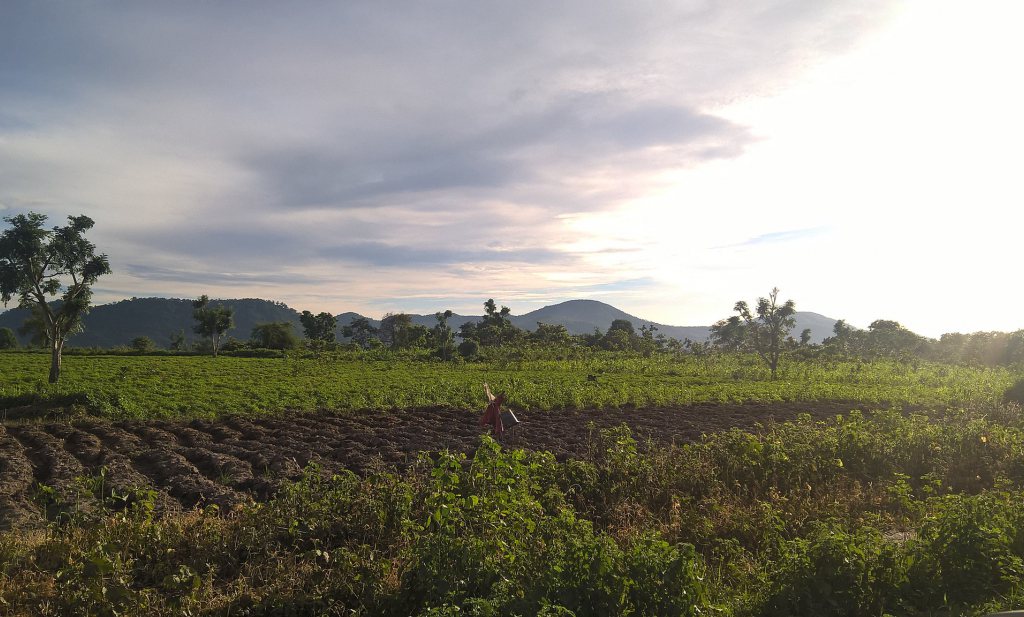 8
Photo credits: A Farmland in Kuje, Nigeria, Joseph C. Okeke
For the functioning of cooperatives, cooperation is required. Cooperation requires trust. This sounds obvious, but it is difficult to establish trust and cooperation in the African context. Why?
Research has shown that larger cooperatives mostly do not function within the African context. As soon as the organization grows beyond the small circle of personalized relationships, problems arise related to trust, money and authority. What can explain this phenomenon?

Family solidarity
Family and kin solidarity is the quintessence of African relationships. Family is all important. That is not only the case because people like each other and have established relationships, but also because of economic reasons. Family and house have always been the primary production units. Within those families, often consisting of more generations, the older generation was always in the lead. Respect for the elderly is still very important in Africa and although egalitarian relationships do exist, they still have to adapt considerably to the traditional patriarchal framework. They cannot go beyond a certain bandwidth, as in bad times there is no other safety network than the family.

Dependency and vertical networks
This state of affairs has important consequences for entrepreneurial initiatives in general. If one’s position within the family system is low in terms of status and this person wants to start a business, he or she needs high status family members in order to access loans, licenses or enter the market. These vertical networks stretch out beyond the family as well. A member of parliament can be called upon to help a far away relative. That helps for clearing imports, licenses and lifts other barriers of entry to the market. Someone who doesn’t have the resources to return the favour due to poverty and low status, is excluded from these assets. As a consequence, these vertical networks are all important. They are not egalitarian and they are not based on trust from the clientele towards the top, but on adaptation and negotiation. Africans don’t act this way by choice, but because they cannot avoid their patrimonial networks.

Cooperatives and trust
This state of affairs leads to two central questions. Do the members of the patrimonial networks trust the leadership? Do the members trust each other? Usually in vertical networks, one cannot avoid the people at the top. People will cooperate not because of trust, but for the benefit. Also, other people in the vertical network depend on people from the top more than from each other. The person on the top of course will not tell what privileges may have been granted to some other member of the clientele system, in order to prevent another person will claim the same favours. One has to deal with this system, because it is also your protective umbrella.

After a while, the outsiders gone, the board of the cooperative starts functioning as a vertical network

Government agencies and NGOs
Surely, in Africa times are changing as they are everywhere. Government agencies and NGOs work on these issues. They try to gain the confidence of farmers and make them cooperate. But often, even Africans themselves, forget where these farmers are coming from and how they will perceive the “cooperation”. In many instances NGOs make a serious effort to gain the trust of the farmers. After a while they think that it works and so after some years the project is handed over to a cooperative doing the same and continuing what has been started.

The project introduced reliable relationships from the top to the bottom and cooperation between the farmers. However, after the project has been handed over it starts to dysfunction. That’s when white Western donors often start complaining about the lack of ownership.

By ownership they understand that the board that took over continues to take the lead in establishing trust and egalitarian relationships from the top to the bottom. But old habits don’t die easily. After a while, the outsiders gone, the board of the cooperative starts functioning as a vertical patrimonial network. It grants privileges to each other and makes use of the dependency of the farmers. As a consequence, farmers opt out. They suddenly sell their produce elsewhere, because they see an opportunity, so they feel no commitment to each other and to the cooperative. That may even be the case if the board still is reliable. It’s African business as usual: if you find a better umbrella, make use of it!

Social transformation
I know I am telling a sad story. Probably I will receive the comment that this contribution is prejudgmental and pessimistic. From my side, I want to question the setup and procedures of most development projects. One cannot bring about social change merely by introducing new procedures and new technologies.

I know I am telling a sad story. Probably I will receive the comment that this contribution is prejudgmental and pessimistic. From my side, I want to question the setup and procedures of most development projects

By introducing new technology without the introduction of new value sets and new mindsets one will put new wine in old wineskins. In order to really make progress, a more comprehensive approach is required. Egalitarian relationships and partnerships require something different. The simple fact of installing a board of a cooperative does not only require economic and technical expertise, but also a different mindset and value set in order to make it work. The economic/technical and mindset/value set need to be addressed by an integrative approach towards development. A mostly Western agency gains the trust of the farmers and establishes new procedures and implicitly assumes that ownership will be present, because everybody appears to be very cooperative. But while western agencies assume they work on the basis of egalitarian relationships, commitment and ownership, their African counterparts see a new vertical network coming in from the outside.
After two or three years when the project is finished, commitment erodes. Why? The African often doesn’t think “how can we continue this beautiful new initiative?”, but “I need a patrimonial umbrella of some kind and I have lost mine.” Yes I know, I'm being straightforward here. Please - my dear African friends - prove me wrong.

As an African agroeconomist, academic & agribusiness researcher, I found Otto's writing interesting but a bit obsolete and will definitely need some reviews/updates. We have & still carrying-out researches on cooperation and cooperatives in SSA communities and I can tell you that cooperation, collective action & commitment is needed among key players of a cooperation or cooperative. As a matter of fact, Otto touched on issues which are not very consistent with some advancing African communities especially in SADC, as well as few Eastern and Western African nations. I suggest that such article be co-authored with an African agro-researcher, who understands the workings, socio-dimensions and dynamics of cooperative bodies in Africa. Truly, at the moment, while some farmers in selected Western African nations are being encouraged to form cooperatives, others prefer not to join mainly due to trust issues. I suggest that we breakdown some of the striking points raised by Otto & distribute on google forms so we can elicit to selected leaders and key players of some sort of institution or parastatal in African communities to secure their opinion on this. It is however, noteworthy, that Africa is a nation & community of diverse nations with diversities.

Kees Blokland and Melle Leenstra (agri counsellor from the Dutch embassies in Egypt and Jordan), came up with additional comments on LinkedIn.

Thank you, Dick. I have read Otto's article with great interest. It raises a lot of relevant questions, for instance whether the problem he signals is a purely African one. While I agree with some of the commentators that such a statement is too simple, (the 'larger cooperatives' and their loss of cooperative spirit are a well-known problem also in Europe), it also is true that the clientelistic culture in many African countries (but also elsewhere!) certainly does not favour the development of cooperatives as we know them in our West-European context.

Nevertheless, I think the author is too pessimistic. I will argue this on both a theoretical and a practical level.

As Otto rightly mentions, trust is fundamental for sound cooperative development. And it is more easily lost than gained, as is made clear in a well-known Dutch proverb, roughly translatable as "trust arrives on foot, but leaves on horseback." But trust is only one of the two conditions generally considered as crucial; the other one is profit. And of course they go hand in hand. If the cooperative ensures (thanks to decent governance) stable profit-making for its members, their inclination to 'opt out' will diminish and their trust will increase.

Readers will say: "ah, but there's the catch! How to ensure 'decent govenance' and avoid that the board of a cooperative starts acting in a clientelistic manner?" Here the issue of member commitment is essential: a board can only go as far as its members allow it to go. And I think member commitment is more likely to occur in cooperatives that have originated on the bases of previously existing forms of association between producers, and less so in newly-created cooperatives. Ownershp and commitment will naturally be less present in such cases, which are (perhaps) the cases Otto Kroese has in mind.

For those interested, and without aiming to advertise myself, the relationship between these elements (trust, profit, commitment, governance etc.) is further explored in several of the contributions in a book I co-edited. One very interesting example of how things can work well is described in a chapter on of coffee cooperatives in Uganda, where a sound structure, with the cooperatives organised in a professional federation (NUCAFE) that plays an active role in advising the member cooperatives in their management and governance.

Also on the practical side, and although I have left Agriterra six years ago and have no first-hand data, I have the impression that their approach to the strengthening of cooperatives is working, also in Africa: jobs are being created and cooperatives have more access to credit, as is claimed in their annual reports.

So I would say the glass is half-full. Of course clientelism and short-term thinking hamper strong cooperation between farmers; that happens everywhere. But building and supporting strong counterexamples and communicating about them is the best way to fight those negative factors.

Jur Schuurman, you have a lot of experience in dealing with cooperatives in low income countries. What is your opinion?

There is some more discussion by Letsholo Mojanaga (from South Africa) and Ikechi Agbugba (from Nigeria) on my LinkedIn page.

Babatunde Olarewaju took Otto's article to talk about trust and empowerment in his weekly Letter to his Farmers.

This is a most interesting and crucial discussion. In 1-1 conversations - sadly, I hope more people will speak out here in public -with black friends on the ground in Africa I also sensed a 'spot on' reaction.

I guess it's important to find out the meaning of this mix of reactions, as I didn't get any messages that reconcile the 'pro' and 'con' positions.