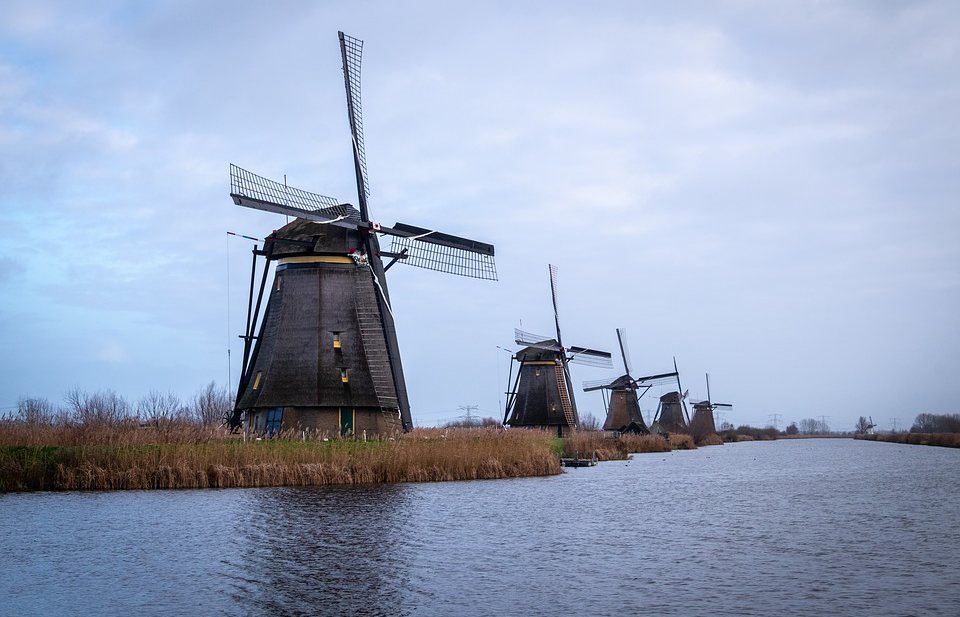 0
'The Netherlands is the second largest exporter of food in the world today.'
Photo credits: 'Kinderdijk', maxpixel
The Netherlands has a reputation for being the tiny nation that feeds the world. However, the current agricultural production and food system must undergo significant changes and reorganise. Krijn Poppe asks the question - is an alternative farming future possible, and how do we get there? His article Time for Departure: A reflection on the Dutch Food System explores the question with an economic lense in an attempt to discover how the Netherlands can “create the most innovative metropolitan business cluster for sustainable and healthy food and (landscape) services.”

The History of Modern Dutch Agriculture
Krijn Poppe begins the analysis with a brief introduction of the developments that modern agriculture in the Netherlands has undergone since World War 2, beginning in the 1960s. After the war, the government led a push towards a modern Dutch food system, mostly because the country had suffered immense damage and economic loss as a result of the war. Labour productivity on farms was too low to be internationally competitive, but exports were needed to generate income to rebuild the country. As such, there was a push for higher productivity, higher technology, and intensification of land use on farms.

As this carried on into the 1970s, however, a trend began to emerge where this modernisation model was seen as problematic, since higher supply and overproduction led to more environmental problems and a disappearing middle segment of farmers: “only large farms and hobby farms survived.” As such, a modernisation counter-culture emerged, mostly centered around environmental issues caused by these new methods. With that came increased legislation around farming, both from governments and other actors, such as retail organisations and NGO’s.

Poppe believes this lobbying and legislation was the beginning of the “introduction of products that were differentiated with animal welfare or nature-friendly concepts and produced under contract.”

The traditional farm orientation was broadened into food chains, consumer research, and new developments like information and communication technology (ICT)

Farming and Economics
Poppe illustrates in detail throughout the article that economics has a large role to play in transforming the food system for a variety of reasons, since it can be used to describe and explain developments in agriculture over the past 50 years. He points out 3 particular examples of this: the treadmill theory, a shift to a more complex form of chain organisation, and “agglomeration/cluster effects that create synergy” across global markets.

Agribusiness at a Crossroads
According to Krijn Poppe, Dutch agribusiness is now at a crossroads and engaged in a “fierce debate” between the productivity (old) system and the sufficiency (new) system. Additional factors that influence this scenario are two emerging disruptors: digital food systems and COVID-19. With regard to the former, the development of new systems typically goes through several phases: from innovation, to frenzy, to crisis, and finally to a “turning point with institutional innovation”. Thus, the emergence of ICT has transformed the world, and this technology now has “the potential to revolutionise the food system from retail to agriculture.” The second disruptor, COVID-19, means that markets and governance systems need quickly to adapt to new circumstances, which may lead to increased preferences for regional products.

As such, Poppe believes that in order to reach peak efficiency and performance, the Dutch food system must revert back to the modernisation process and rebuild trust at the weakest parts of the chain: the farmers and the citizens. He proposes that this “new green deal” should be transparent, support for digitisation, and allows for a constant monitoring of how the systems are meeting environmental regulations that surround them. Poppe gives examples of each of these from the research agenda of Wageningen Economic Research: digital transparency, consumer data platforms, and regional strategies. As such, we see that economic research is “well prepared” to support farmers with “alternative business models based on differentiation and diversification.”

...different themes like climate, energy, circularity, biodiversity have to integrated and linked to regional priorities and economic structure

The central idea then holds that digitisation can and should be used to support the weakest links in the Dutch food system (consumers and farmers). This can be done by building on modernisation trends of Dutch farming from the 1960s, as well as involving more economists in the process. Empowering these key players and reorganising the food system will ensure that these “actors get the right incentives to do what they ideally should do.”

After reading Krijn Poppe’s article, do you agree that a re-organisation of the current system and further integration of digitisation at all levels is necessary and beneficial to Dutch farmers? Or will this again lead to the emergence of a modernisation counter-culture with respect to environmental concerns? And how have the introduction of ICT systems and COVID-19 as disruptors already contributed to changes in these areas?


Krijn Poppe is a Rotterdam trained economist and policy advisor in relation to food systems and agribusiness. He has spent decades in the field, notably working for the Dutch Ministry of Agriculture, as well as working for 40 years as a research manager and senior economist at Wageningen Economic Research. A prolific author and academic, he has also published numerous papers on the topics. He currently fills many roles, including as a co-owner of farm 'de Baaiweg', as well as being a Member of the Council for the Environment and Infrastructure. He recently retired form Wageningen Economic Research.
Comment
Comment